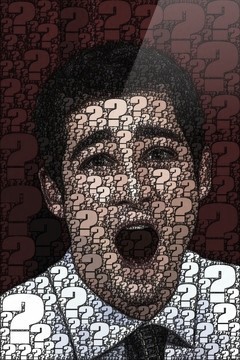 Here are the answers to some of the most frequently asked questions about WordFoto. Should you have other questions, please contact us.

How do I enter my own words, and why can't I write a space between words?

Tap the Words icon (bottom) to get to the Word Sets screen. Then, to add a new word set, tap Add new Word Set, or to edit an already existing word set, tap the Edit button (top left).

A word set consists of one or more words. When adding or editing a word set, tapping space or enter will start a new word in that word set. Too long words are not able to make up a good looking image (they are less likely to fit together without a lot of them getting very small), so the way things work is that you specify all the words separately (as a word set) and all those words then make up the image. A WordFoto image made out of only a long sentence would look horrible. Single, short words will produce the best results because it is easier for the algorithm to fill the details of the image and spaces between already placed words.

At what resolution are the resulting images saved?

No matter what resolution your original image has or how you crop it, the saved images will be either 5MP or 3MP, depending on your device.

The reasons behind this is that we wanted to have as high resolution as possible, to capture the detail in the rendered words, even the small ones. However, there are a lot of factors that we've had to balance against each other, eg computing speed, memory consumption, user experience, algorithm complexity and optimization, etc.

Can I save my WordFoto images as vector graphics?

Not in the current version (1.0.2). We are investigating the possibilities of adding vector export and it looks promising so far.

How does Finetune work?

First of all, we are aware of the fact that Finetune is not very user friendly at the moment, and at the same time, getting a feel for Finetune (and Custom Styles) is crucial to be able to get good results. We are working on making this easier to understand and use. Until then, you'll have to experiment with the parameters to get a feel for them.

Here are some reasonable "default" values that might get you started:

The best values for these parameters really depends entirely on your current original image, and the type of effect you want. A large Color Tolerance value means the words will get bigger, since they don't try as hard to capture the color differences in the image underneath, and a small value means the opposite. A large Edge Threshold value will allow the words to cross over more edges in the image, and a small edge threshold will find more edges in the image for the words not to cross, and therefore give smaller words. The effect of the Edge value (0, 1 or 2) is more visible in some images than others, and basically it controls how prominent the found edges are in the final result.

How do I create my own styles, why isn't there a reset / start over button and can i set brightness, etc?

As with Finetune, we are aware that the Custom Styles are not very user friendly in the current version (1.0.2), and until we have improved the style system you will have to experiment to get a feel for how the parameters work. The next update will allow you to copy and paste between preset and custom styles, and that way there will be no need for a reset / start over button (since you'll just copy the preset which you consider to be the "default" style and paste it on a custom style of your choice). You'll also be able to rename custom styles in the next update.

There is no reset / start over / new button. You simply load another image, and adjust the parameters.

The parameters (saturation, brightness, contrast, padding, foreground, background, etc) are really easier to figure out by experimenting than by reading about them. We might add some info or tutorial to explain the parameters in the next update.

Will there be more fonts, and fonts that support the characters of my language?

Yes. The next update will contain more fonts and it will also (hopefully) let you import and use your own fonts(!), and the system fonts of the device (although most of them are not heavy / bold enough to make good looking WordFoto images).

Will you make a native iPad / iPad HD version, and Photoshop & Illustrator plugins, and Mac OS and PC versions, and Android, Blackberry and Nokia versions, and Facebook version, etc.?

We have no other plans than improving and updating the iPhone version and making it a universal iOS app (iPhone, iPad, iPod). We are currently only developing for iOS devices, but this will of course change when or if developing for some other platform (e.g. Android devices and distributing through Android Market) becomes the obvious choice. At the moment we can not afford and motivate dividing our focus across more than one platform (and the multitude of different hardware devices that follow). We prefer to spend our time and money making the most out of the platform that currently is the most efficient one for us to work with.

Can I use my creations to print on canvas and sell or do you have a certain copyright on the technique/style?

The technique/style of filling an image with words has been used for several hundreds of years and in more recent time a lot of people have been doing it by hand or using computers in various ways, so no, we have no copyright on it, we are just trying to make the space finding and word filling into a semi automated process that still produces good looking results fast enough to be used without too much trouble or frustration by the average user.

You have full responsibility and rights to the images you create with WordFoto, and you can use them in any way you like, including commercially.If you make something nice that a lot of people see or buy, we would of course be happy if you mention WordFoto.

No, they are not fake. Every single screenshot of ours has been made using only WordFoto (no other processing) on an iPhone 4, using custom styles, and the photos have been captured from within WordFoto with the same iPhone 4.

WordFoto doesn't do magic and it doesn't make every photo and all words look great. You'll have to use photos that work well (close up of faces, lots of smooth surfaces and lots of contrast, not too much detail), select good word sets (several short words) and do a lot of experimenting to get a feel for how to use custom styles and finetune. Press re-render until you get a random word placement that you like.

Will it be possible to place some of the words manually?

It is not possible in the current version (1.0.2). We are thinking about different ways to implement it but it will probably not be available in the next update either.